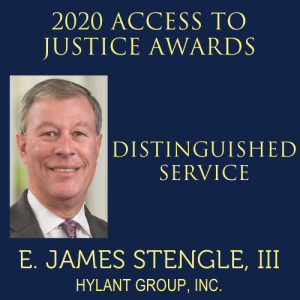 “The business community has as much to gain – or as much to lose – by us being able to, in effect, take better care of individuals and to allow true access to justice, irrespective of someone’s ability to afford it.”

E. James (“Jim”) Stengle, III has served as a leader in the Toledo community for decades, in both professional and community service positions. Over 30 years ago, when Jim realized that the legal community provides strong support to ABLE, LAWO, and the TBA Pro Bono Program, he immediately began trying to broaden support for the organizations among the corporate community. Since that time, he has continually and passionately dedicated his time, talent, and treasure to those ends.

“Clearly recognizing the importance of the work that we do with ABLE, LAWO, and the TBA’s Pro Bono Program and what it really does to enhance and strengthen the social fabric of our communities. The business community has as much to gain – or as much to lose – by us being able to, in effect, take better care of individuals and to allow true access to justice, irrespective of someone’s ability to afford it.”

Volunteering to help raise significant funds to support legal aid, Jim has spent countless hours reaching out to colleagues in the business community, educating them about the critical benefits that legal aid brings to the community. He has consistently served on major ABLE and LAWO fundraising efforts, culminating in hundreds of thousands of dollars being donated to equal justice in our community. He has served numerous years on the Access to Justice Awards Steering Committee, including two years as co-chair. He has served on the annual campaign committee as well as on the Center for Equal Justice capital campaign, helping to raise over $6.8 million to make the Center a reality.

Today, thousands of people in the Toledo area have gained access to our justice system because of Jim Stengle. Toledo is a better community because of his efforts.

Jim has over 30 years of experience in the employee benefits field and has consulted with many large organizations throughout his career. Jim has also held significant leadership roles with the entities with whom he’s been affiliated. As Hylant Group Senior Vice President, Business Development Executive of Employee Benefits, Jim is primarily responsible for teaching and coaching Hylant’s group of newer employee benefits client executives. In addition, he is focused on bringing innovative employee benefit programs to Hylant. His professional specialties include employee benefits and EB labor contract negotiation.