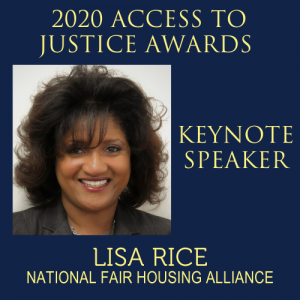 “We still have challenging issues to address: America’s discriminatory dual credit market, resurgent redlining practices, sexual harassment by unscrupulous landlords, and discrimination against those who have a criminal record, to name a few.”

Lisa Rice is a proven leader and advocate for fair housing and fair lending who fights discrimination. As the keynote speaker for the 2020 Access to Justice Awards Celebration, Ms. Rice will address the current impacts of redlining and discriminatory housing policies.

“In times of crisis, the worst aspects of society can sometimes be displayed. Since the COVID-19 virus began its spread, there have been reports of increased discrimination against Asian Americans and Pacific Islanders, and we have seen irrational acts of xenophobia. We also know, from decades of experience, that in times of crisis, women are particularly susceptible to acts of sexual harassment from their landlords and other housing and financial services providers.”

For 25 years, the former Toledo resident has been committed to managing and leading fair housing organizations. She has led teams that investigated, brought, and resolved precedent-setting fair housing cases resulting in the elimination of systemic discriminatory practices in the areas of lending, appraisals, insurance, rental, and real estate. Ms. Rice played a major role in crafting sections of the Dodd-Frank Wall Street Reform and Consumer Protection Act and in establishing the Office of Fair Lending within the Consumer Financial Protection Bureau.

Prior to working at NFHA, Ms. Rice served as the CEO of the Toledo Fair Housing Center where she generated a reserve fund of over $10 million for the organization. Recognizing the need for funds to help Toledo homebuyers, she established the Northwest Ohio Development Agency, a community development financial institution that provides below-market interest loans, grants, and financial services to historically under-served markets. She also developed and implemented Restoring the Dream, the State of Ohio’s first anti-predatory lending remediation program. Under the program, hundreds of consumers victimized by predatory lending practices were refinanced into affordable, sustainable prime loans or received loan modifications to help them avoid foreclosure.

“We still have challenging issues to address: America’s discriminatory dual credit market, resurgent redlining practices, sexual harassment by unscrupulous landlords, and discrimination against those who have a criminal record, to name a few.”

Ms. Rice is a published author, having contributed to several books and journals on a range of fair housing issues, including a chapter entitled “The Fair Housing Act: A Tool for Expanding Access to Quality Credit” in the book honoring the 50th Anniversary of the Fair Housing Act: The Fight for Fair Housing: Causes, Consequences, and Future Implications of the 1968 Federal Fair Housing Act (Squires, ed., 2018).