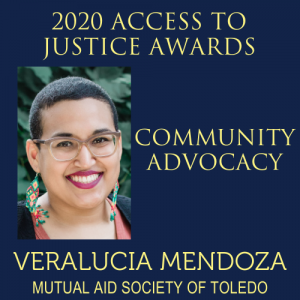 “Housing should be a human right, not a privilege. These things are not radical, but the minimum and base of human quality of life.”

Hailing from the deserts of Peru, Veralucia Mendoza has made a home in the Midwest. Vera’s nearly 15 years lived as an undocumented immigrant prompted her, as a teenager, to study immigrant movements, international relations, and law. By the age of 19, an interview with the Toledo Blade placed her at the center of debate around Deferred Action for Childhood Arrivals and immigrant rights in Ohio.

“The reality is that I grew up as an undocumented immigrant. I grew up with parents that had to struggle through low-income and different migration issues and still they joyfully created a space to empower me and help me believe in a future where I could thrive.”

Over the years she has joined ABLE attorneys and other activists in successfully defending tuition equity for undocumented immigrants in Ohio and providing interpretation services in Ohio prisons. She has established herself locally as a community organizer over the past 13 years, having served in rapid response for migrant worker justice, LGBTQ+ migrant rights, and responding to ICE raids. She stepped on to the national field in 2017 by joining Mijente, a leading national political home for Latinx and Chicanx movement building. She currently works in reproductive health advocacy.

“In a society that focuses on respectability and who looks the most professional and holds the most social capital and who holds the most informal power to influence others, I am not what’s thought of in our society. I am a black and brown person. I am a formerly undocumented immigrant. I am an English as a second language speaker. And I am a queer person who is visibly and openly queer.”

Most recently, Veralucia created Mutual Aid Society of Toledo in light of the coronavirus pandemic and subsequent economic disaster. The success of the group’s ability to swiftly organize aid for thousands was recognized throughout the city. Her advocacy work has been highlighted on NPR, Democracy Now!, CNN, Splinter (previously Fusion), The Toledo Blade, WTOL, and the front cover of The Toledo City Paper. Vera is also a 2020 “20 under 40 Toledo” honoree.

“Housing should be a human right, not a privilege. These things are not radical, but the minimum and base of human quality of life. Instead of shutting out activists as ‘too radical,’ we can learn to work with them and harness the energy and the desire they have for better futures and their creativity to imagine a new possibility. If you can harness that, we can work very closely to show support for, and pass, legislation that is fair and equitable for all.”

Veralucia earned a Graduate Certificate in Financial Management in 2015 from Cornell University’s SC Johnson College of Business, and has a background in Law & Social Thought from The University of Toledo.